on June 20, 2021
Choosing a pen or pencil to write shorthand is an important task which most of the people ignore. A good quality pen or pencil is required for shorthand writing which will help in visibly neater strokes helping us to transcribe our notes into English much faster than transcribing shabbily made strokes which mostly results from poor choice of pen or pencil. Pen and pencil both have there own advantages and disadvantages which we will be understanding here-

Pen
Advantages
1. Pen can be used for for writing both small and big passages as the refill of the pen is enough to write any no. of pages during a dictation.
2. Unlike pencil, the pen does not need to be sharpened or replaced in between the dictation which is a big plus point during examination as 2 seconds break would end up missing few words of the dictation.
3.The strokes made by pen are clearly visible due to the dark ink whereas strokes made by pencil can be lighter depending on the type of pencil used.
Disadvantages-
As you may know that few consonants in shorthand have same outlines and the only difference is whether they are made lightly or darker. Same outline can only be made in dark and light dark through pencil only. For eg. P and B both have same outline \ and the only difference is that P letter is made with light stroke and B letter is made with darker stroke. However, the light and dark method is mainly used by the beginners to understand the two letters easily and as your speed and knowledge increases, the word can be understood without the light and dark rule.
Pencil
Advantages
1. Pencil is more preferred for the beginners due to the light and dark rule of strokes we discussed earlier. Once the basic training is completed then the student can shift to pen for writing.
2. Pencil is great for short dictation of upto 200 words where as a newly sharpened pencil give very sharp outlines which is easier to understand rather than thick outlines which are made once the tip of pencil starts to blunt.
Disadvantages
Pencil is not advised for longer dictations as the tip of pencil starts to blunt and you will need to replace the pencil in between the dictation. The tip can also break anytime in between dictation for which you would require few standby pencils.
Conclusion
Pen and pencil both can be used depending on the level of knowledge of student and the length of dictation you are going to write. Beginners should start off with pencil and once they have gained knowledge of shorthand words along with speed, its better to shift to pen as only pen keeps you away from uncertainty of breakage of tip. However, it is always recommended to keep few things in mind before choosing a pen for your dictation-
1. Pen should always have a thin tip for the strokes to be clear and readable, a thick tip would reduce the gap between the strokes of the word.
2. Choose a pen which is not very smooth and you should have control over your fingers as little bigger outlines would completely change the meaning of the stroke.
Here are few pens I recommend for best shorthand writing experience-
Pencils recommended for shorthand writing
Shorthand FAQs/ Tips 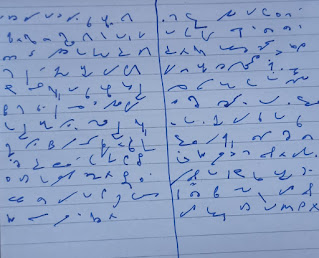